First - What is Marijuana?

Marijuana, also called weed, pot, dope, or cannabis, is the dried flowers and leaves of the cannabis plant. Marijuana contains mind-altering compounds like tetrahydrocannabinol (THC), as well as other compounds like cannabidiol (CBD) that are not mind-altering. (CDC)

Connecticut legalized adult-use THC and marijuana in 2021. You have to be 21 to be able to purchase it, and it is important to remember that like alcohol, marijuana is dangerous to the developing brain.

Impact of Adolescent Marijuana Use

Young people start using marijuana for many reasons.  Curiosity, peer pressure, and the desire to fit in with friends are common ones.  Those who have already begun to smoke cigarettes or use alcohol—or both—are at increased risk for marijuana use as well. Adolescents who used marijuana regularly were significantly less likely than their non-using peers to finish high school or obtain a degree.  They also had a much higher chance of developing dependence, using other drugs, and attempting suicide. (National Institute on Drug Abuse)

Research shows that adolescents who smoke marijuana once a week over a two-year period are almost six times more likely than nonsmokers to drop out of school, and over three times less likely to enter college. (Smart Approaches to Marijuana)

A study from New Zealand conducted in part by researchers at Duke University showed that people who started smoking marijuana heavily in their teens and had an ongoing marijuana use disorder lost an average of 8 IQ points between ages 13 and 38.  The lost mental abilities didn’t fully return in those who quit marijuana as adults.

The Impacts of Marijuana on the Brain & Body

Using marijuana causes impaired thinking and interferes with a person’s ability to learn and perform complicated tasks.  Instead of the desired relaxation and euphoria, some people experience anxiety, fear, distrust or panic when using marijuana.  These effects are more common when a person uses too much and the marijuana has an unexpectedly high potency. (NIDA)

Marijuana affects a number of skills required for safe driving—alertness, concentration, coordination, and reaction time—so it’s not safe to drive high or to ride with someone who’s been smoking. Marijuana makes it hard to judge   distances and react to signals and sounds on the road. (NIDA)

About 1 in 10 marijuana users will become addicted. For people who begin using before the age of 18, that number rises to 1 in 6.

Some of the signs that someone might be addicted include:

People who are addicted to marijuana may also be at a higher risk of other negative consequences of using the drug, such as problems with attention, memory, and learning. Some people who are addicted need to smoke more and more marijuana to get the same high. It is also important to be aware that the amount of THC in marijuana (i.e., marijuana potency or strength) has increased over the past few decades. The higher the THC content, the stronger the effects on the brain. Researchers do not yet know the full extent of the consequences when the body and brain (especially the developing brain) are exposed to high concentrations of THC or how recent increases in potency affect the risk of someone becoming addicted. (CDC)

It is important to remember that people of any age, sex, or economic status can become addicted to marijuana or other drugs.  Factors that can affect the likelihood of substance use include: family history, having another mental health illness (such as anxiety or depression), peer pressure, loneliness or social isolation, lack of family involvement, drug availability, and/or socioeconomic status. (CDC)

In the short term, high doses of marijuana can produce a temporary psychotic reaction involving hallucinations and paranoia.  There is also sufficient data indicating that chronic marijuana use may trigger the onset or relapse of schizophrenia in people predisposed to it, perhaps also intensifying their symptoms. (American College of Pediatricians)

The Impact of Marijuana on Society

In the United States, marijuana dependence is the third most common type of substance dependence (preceded by alcohol and tobacco).  It is estimated that 8.5% of the U.S. population will experience a marijuana-use disorder during their lifetime. (SAMHSA)

Secondhand marijuana smoke contains THC, the chemical responsible for most of marijuana’s psychological effects, and many of the same toxic chemicals in smoked tobacco.  Therefore, breathing it could affect the health and behavior of nonsmokers, including babies and children who are exposed. (CDC)

Several studies have shown that drivers with THC in their blood were roughly twice as likely to be responsible for a deadly crash or be killed than drivers who hadn’t used drugs or alcohol. (NIDA)

In the workplace, 44% of those with a substance use disorder have sold drugs to coworkers, and 18% have stolen from coworkers to support their habit. (NDASA) Talking about use in the workplace can help encourage employees to seek help. Employer support is helpful with long-term recovery. 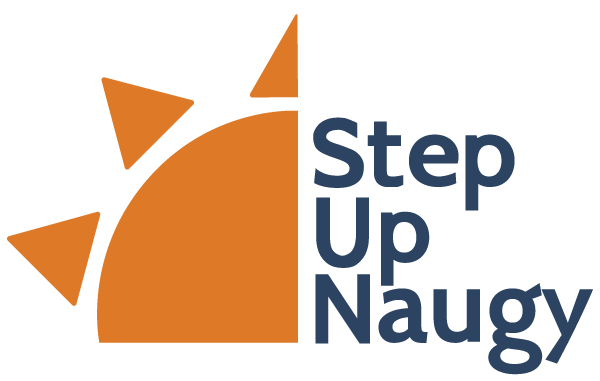 Our mission: to keep Naugatuck youth safe, healthy, and drug-free.

The primary vision of Step Up Naugy is to employ effective and sustainable strategies to prevent use and abuse of alcohol and other drugs among Naugautck youth. By building a network of concerned citizens, our coalition promotes healthy, positive behaviors and relationships in our community.